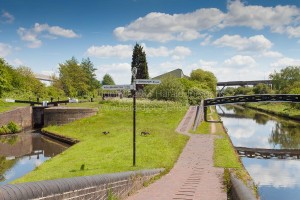 The canals and waterways played a key role in the UK's industrial development. The introduction of canals made the growth of the Birmingham area to the country's then industrial heartland possible, growing the Birmingham canals network to 174 navigable miles of waterways.

With the end of commercial transport on the narrow waterways, more and more of the canals were abandoned and closed - today, 114 of the 174 miles have survived.

The Birmingham Canal Navigations Society (BCNS) organises an annual event to encourage the navigation of the less used waterways - the BCNS 24 hours Marathon Challenge, a friendly competiton for boaters. Starting anywhere on the BCN, and ending, in 2014, at Hawne Basin, on the Dudley No. 2 Canal in the south of Birmingham, the participants have 30 hours (including six hours of mandatory rest) to navigate as many miles and locks of the Birmingham Canal Navigations network as possible.

In 2013, I had the pleasure of being a guest on narrowboat Felonious Mongoose, 420 photos documenting the event can be found in the 2013 BCNS Marathon Challenge Image Library.

For the 2014 Marathon Challenge I have been lucky enough to be a guest on Felonious Mongoose again. For almost the whole weekend the weather varied between heavy and very heavy rain, with a negative impact on the photography.

An interactive panorama have been created after the event: 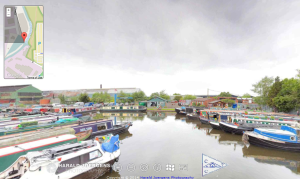 Hawne Basin, Dudley No. 2 Canal
Click to open the panorama