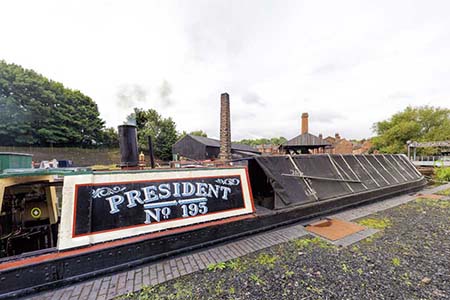 Customer:
The clients is "Friends of President", a group of dedicated volunteers that run the historic steam narrowboat President, and the Black Country Living Museum in Dudley, West Midlands, one of the finest and largest open-air museums in the United Kingdom, and owner of President.

Explore the engine room and start the engine, experience the cabin by day and night, and stand at the tiller of the boat

How it was done: All photography inside the boat has been done with the camera remotely controlled via a laptop computer in the hold - just visible if you try hard to find it.

Because of the extreme contrasts between the relaively dark interior and the bright sunshine outside, exposure bracketing had to be used, and all the images cobined from focus stacking have been processed in HDR (High Dynamic Range) to compress the brightest and darkest parts.

Technical information:
This interactive panorama uses only HTML5. A Flash version could be added, but the usage of Flash seems to be declining rapidly, whilst almost all modern browsers support HTML5.

Narrow boat PRESIDENT:
President was built in 1909 at the Fellows, Morton and Clayton company dock at Saltley, Birmingham. A steam engine was heavy and required a significant amount of space, in 1925 it was replaced by a Bolinder engine, increasing the carrying capacity by almost 50%. President ended her working days, after the canals were nationalised, with the British Waterways northern maintenance fleet based at Northwich working on the Trent and Mersey, Macclesfield and Shropshire Union Canals

President was bought by the Black Country Living Museum in January 1983. Friends of President was formed in October 1984 to assist in the operation and maintenance of this unique vessel. In 1990 the Muir and Findley boiler was replaced by a Cochran dryback return flue boiler.

During 2001 to 2003 President underwent a major refit, with new steam engine and pipework, new cabin and major hull repairs.

Much more about President's history can be found on the President website, and in this document about the restoration work.