The Lancaster is certainly an iconic and most interesting British aircraft. However, as it was built as a weapon of war, it could also be lethal to its own crews. Bomber command crews had a death rate of 44.4% and 55,573 were killed during the war. They should be remembered.

The Lincolnshire Aviation Heritage Centre, home of "Just Jane" and former RAF bomber station East Kirkby, has a beautiful Memorial Chapel that's part of this virtual tour. Reading all the names on the wall panels is a reminder that they were not just numbers, but people with parents, wives, children and loved ones that never came home.

HERE LIES THE CREW
OF A LANCASTER BOMBER
WHICH CRASHED ON 29TH JANUARY 1943.

THIS MEMORIAL IS THEIR FAMILIES' TRIBUTE
OF LOVE AND REMEMBRANCE. 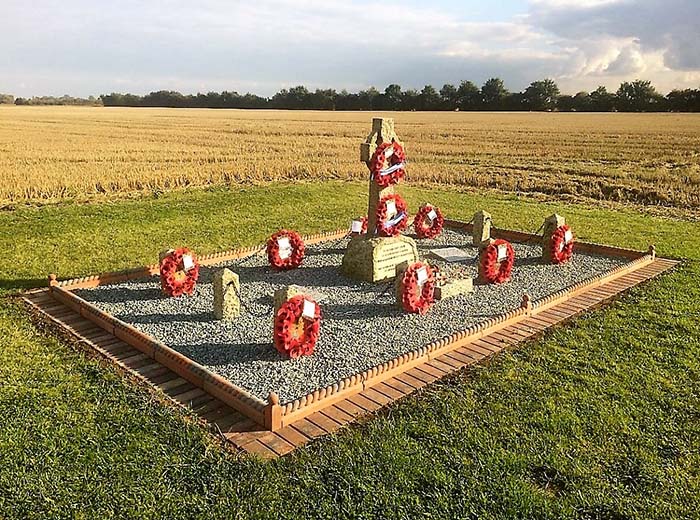 The crew of ED503 died in an accident. The aircraft was almost brand new, it had been delivered 6 days earlier from A.V.Roe (AVRO), and had only been in the air for a total of 85 minutes. The crew had been posted to 9 Sqn at RAF Waddington just two days before the crash.

On the day of the crash, they had been briefed for a raid on the German U-Boat pens at Lorient in France, but bad weather along the route and over the target meant that the mission was scrubbed. They were then tasked with undertaking a 'Flight Affiliation' training flight with a Spitfire from RAF Digby (the only Battle of Britain airfield in Lincolnshire). As the training flight was local to RAF Waddington, the Navigator was not required and was stood down. The aircraft and crew were lost during this training flight.

About this Virtual Tour

**Customer:** The client is the [Lincolnshire Aviation Heritage Centre](http://www.lincsaviation.co.uk/) in East Kirkby. The museum, on the site of the Bomber Commmand airfield [RAF East Kirkby](https://en.wikipedia.org/wiki/RAF_East_Kirkby), is the largest Bomber Command museum in the UK, and offers [taxy rides inside the Lancaster](http://www.lincsaviation.co.uk/lancaster-taxy-rides/), certainly a unique experience!
"Harald Joergens Photography have done an amazing job in creating the virtual tour for us, the result is far better than anything we could have hoped for. The main reason for the virtual tour is raising awareness for our Lancaster, and it does indeed attract a lot of attention from all over the world. We would wholeheartedly recommend Harald Joergens Photography for this sort of work!"
Andrew Panton, Director Lincolnshire Aviation Heritage Centre

Purpose: The museum is working hard to restore NX611 to airworthy condition. This virtual tour has been created to draw attention from all over the world to this unique aircraft, and to attract support and donations to keep "Just Jane" running and to continue the work to get her flying again.

How it was done: All photography inside the fuselage has been done with the camera remotely controlled via a laptop computer, to control focus stacking and exposure bracketing.

The resulting photos have been processed using focus stacking software first, followed by HDR] processing. The resulting images have been edited, then stitched together, edited again, and then turned into a spherical panorama.

Technical information:
This interactive panorama exists in two different versions: One is using, if available, the Adobe Flash Player, the other uses HTML5. The Flash version allows viewing in screen mode, the HTML5 version works on almost all devices that don't have Flash (Apple mobile devices).

The aircraft:
This Avro Lancaster B Mark VII, NX611, was built in April 1945 for the war in the Far East and ended in storage without seeing service. After an interesting career she was bought, in 1983, by Fred and Harold Panton as a monument to the memory of their brother Christopher, who was killed on the Nuremberg raid in March 1944.

General information about the Lancaster is available on Wikipedia.

The excellent website Lancaster Bombers of 49 Squadron contains PDF versions of "Pilot's Notes for Lancaster II", "Flight Engineer's Notes for Lancaster Aircraft", and ".303 Browning Gun Notes for Students", highly recommended!
There is also the Bomber Command History Forum with a large number of very knowledgeable members and a lot of information.

The sections of the Lancaster Virtual Tour:

The rear view shows the FN.82 turret from behind, and allows direct access to the rear fuselage area, the mid-upper gunner's turret, the outside view near the crew door, and the Memorial Chapel. All modern cars have been edited out - with the crew bus, and the original 1943 hangar in sight, this view might be somewhat similar to the view at RAF East Kirkby during the war.

The rear gunner, commonly known as "Tail End Charlie", had the most lonely, cold, and dangerous job in the aircraft. The rear gunner was several metres away from the next crew member, the rear upper gunner, and, behind two closed doors (the sliding door and the draft door), he would have no visual contact to any other crew member, from take-off to landing. The rear of the fuselage was unheated, temperatures at 20,000ft could be around -40 degrees Celsius. The rear gunner was exposed to enemy fire.

Most Lancasters had four .303 machine guns. Late models, like this Lancaster B Mark VII, used a different turret, a Nash and Thompson FN.82 with two .5" (13.3mm) machine guns, with an ammunition capacity of 500 rounds for each gun.

There wasn't much activity in the rear fuselage area, between the rear gunner and the mid-upper gunner, during flight. The chemical toilet was there, in front of the rear spar, and the flare chute. Reconnaissance flares could be dropped to illuminate a target area, and dropping a "bomb flash" flare was neccessary to record the precision of an individual aircraft's bombing on film. "Window", the aluminium strips used to confuse the German radar, was also dropped through the flare chute.

Currently (Summer 2015) there is no real mid-upper turret fitted, unfortunately. NX611 "Just Jane" would have had a Martin CE250 turret, and restoration of a turret for Just Jane is currently going on.

The cupola currently fitted is for an FN.150 turret, fitted to Mk7 interims and Mk1,2,3 Lancasters at the time. Having only the cupola means that the view over the fuselage is excellent, from the front, with the astrodome and canopy in view, over both wings to the rear.

In almost all Lancasters this section of the fuselage would have housed a crew bunk bed. 101 Squadron had a system called Airbourne Cigar ("ABC") which used a set in this section. ABC was a radio jamming system used to disrupt communications between German fighter controllers on the ground and night fighter pilots.

"Just Jane" has an H2X set fitted, this is a post war modification.

The wireless operator (or "radio operator") on a Lancaster was in charge of all communications. In the later stage sof the war, on aicraft like Just Jane, equipped with the H2S ground scanning radar, he was also resposible for an early warning system called "Fishpond" to detect enemy fighters flying below the Lancaster.

A Lancaster bomber's navigator had a complicated job to do: Not only had he to find the target, he had to do so at night and often in bad weather, without sight of the ground or other aircraft. It wasn't just finding the target, it was following an often complicated course towards the target. And he had to find the way back to the UK and the right airfield. From celestial navigation, using the stars, over various systems using radio beams to H2S, the ground scanning radar, the navigator had to know them all to do his job.

The Lancaster bomber is a complex aircraft with four engines and the fuel-, oil-, and cooling systems necessary to run them. Then there is the hydraulics, pneumatics, and the electric system, the flight engineer is in charge of them all. He has a large number of controls and instruments in front and behind his collapsible seat. For more information about all the controls and instruments the CD "The Lancaster Explored" is highly recommended.

On the Lancaster there's only one pilot's workplace. Most British (and German) bombers of WWII didn't have a copilot. The instruments show the big steps forward in technology at the time - there is an autopilot and an early form of ILS. For more information about all the controls and instruments the CD "The Lancaster Explored" is highly recommended.

The bomb aimer, or "air bomber", had his "office" in the nose of the aircraft - either lying on the floor, assisting the navigator, aiming and releasing the bomb load, or, climbing in the cupola above, as the front gunner.

There is no panorama of the inside of the turret yet as there wasn't enough space to get a tripod in and to be able to position the camera.

The front view of Lancaster NX611 "Just Jane" shows the enormous bomb bay, and gives an impression about the size of the aircraft. It allows direct access to the Flight Enineer's station, to the Wireless Operator's station, and to the outside view near the crew door. All modern cars have been edited out - NAAFI at the front, and Just Jane's hangar at the side, this view might be somewhat similar to the view at RAF East Kirkby during the war.

Over 55,500 RAF Bomber Command aircrew were killed, the highest attrition rate of any British unit. In the Memorial Chapel two panels display the names of the 845 aircrew and ground crew, from 57Sqn and 630Sqn, that died from RAF East Kirkby.

The Lincolnshire Aviation Heritage Centre was set up by two brothers, Fred and Harold Panton, in memory of their brother, Christopher Whitton Panton, who was shot down and killed on a bombing raid over Nuremberg, where bomber command lost 106 aircraft and more men than during the Battle of Britain.

The Memorial Chapel is a somber, peaceful place allowing you time for quiet contemplation during your visit reflecting on the tremendous sacrifice made by Bomber Command. The panorama can only try to reflect the atmosphere.