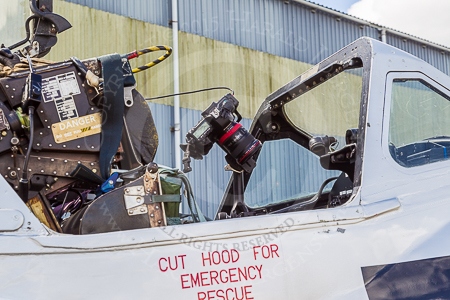 Customer:
The client is the Vampire Preservation Group, proudly supporting WZ507, at North Weald airfield in the UK..

Purpose:
The Vampire Preservation Group operates WZ507, one of the very few still flying Vampires anywhere inthe world (the only one in the UK) and one of the stars of the British air show scene, The interactive cockpit panorama allows anyone interested, especially spectators at an air show when WZ507 is flying, to explore the cockpit of this rare aircraft. It should raise awareness about the task of keeping a 1952 fighter jet flying in the 21st century, and attract visitors to join the Supporter's Club, or even to become owner of a share of the aircraft.

How it was done: All photography has been done with the camera remotely controlled via a laptop computer. The main challenge have been the sun, creating very brightly lit areas as well as very deep shadows, way beyond the dynamic range of a modern digital camera. HDE (High Dynamic Range) processing was the only way to compress the extreme dynamic range. HDR processing made details, especially on the sides of the cockpit, clearly visible when it was difficult to see them clearly with the naked eye.

She was built 1952 by the de Havilland Aircraft Company at Christchurch, Dorset, and was delivered to the Royal Air Force in 1953, WZ507 served with 229 Operation Conversion Unit (OCU) in Chivenor, 8 Flight Training School (FTS) in Swinderby, 5 FTS in Oakington, 3 / 4 Civil Anti-Aircraft Co-operation Unit (CAACU) in Exeter, and Central Air Traffic Control School (CATCS) in Shawbury, before being retired from RAF service in 1969.

In 1980 WZ507 became the first ex-RAF jet fighter to be put onto the UK civilian register (as G-VTII), after being restored to full flying condition by the SAS.In 2005 the Vampire Preservation Group formed to operate WZ507 and preserve it as an airworthy aircraft.