The intention behind these two combined interactive 360° panoramas is to show how state-of-the-art and spectacular a modern lifeboat can be.

There are lots of interactive elements viewers love playing with:

The really spectacular interactive elements are the sounds - all sounds together create a lot of noise:

The virtual tour is used on the RNLI website and on their Facebook page, and attracts large numbers of visitors, almost all of them spending some time to explore. 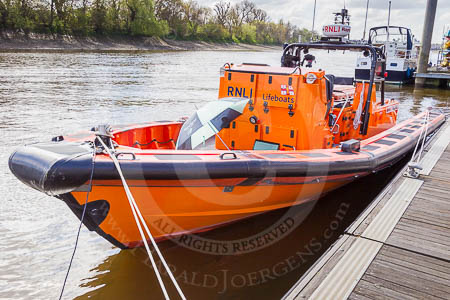 The client is the RNLI Chiswick, the Royal National Lifeboat Institution, based at Chiswick Pier in London, UK.
The RNLI, founded in 1824, is the largest charity that saves lives at sea and on some UK inland waterways like the Thames.

How it was done

All photography has been done with the camera remotely controlled via a laptop computer. The main challenges has been the boat movements and the tide:

The E class is the fastest lifeboat in the RNLI's fleet and is on service at only two lifeboat stations - Tower and Chiswick, on the River Thames. The E class has been specially designed to meet the demands of the Thames with its fast-running tide, powerful debris and heavy traffic. The fast response craft was developed for use with water jets that give it excellent manoeuvrability in the rapidly moving river flow. The equipment includes radar, GPS chart plotter, marine radio, police radio, blue lights, siren, night-vision equipment, first aid, oxygen, entonox, defibrillator. The E class features a working platform at the stern that makes it easier to recover survivors from the water. Powered by twin Volvo Penta 435hp diesels, and using Hamilton Water Jets, the E Class is limited to a speed of 42 knots (that's 48 mp/h, or 78 km/h).